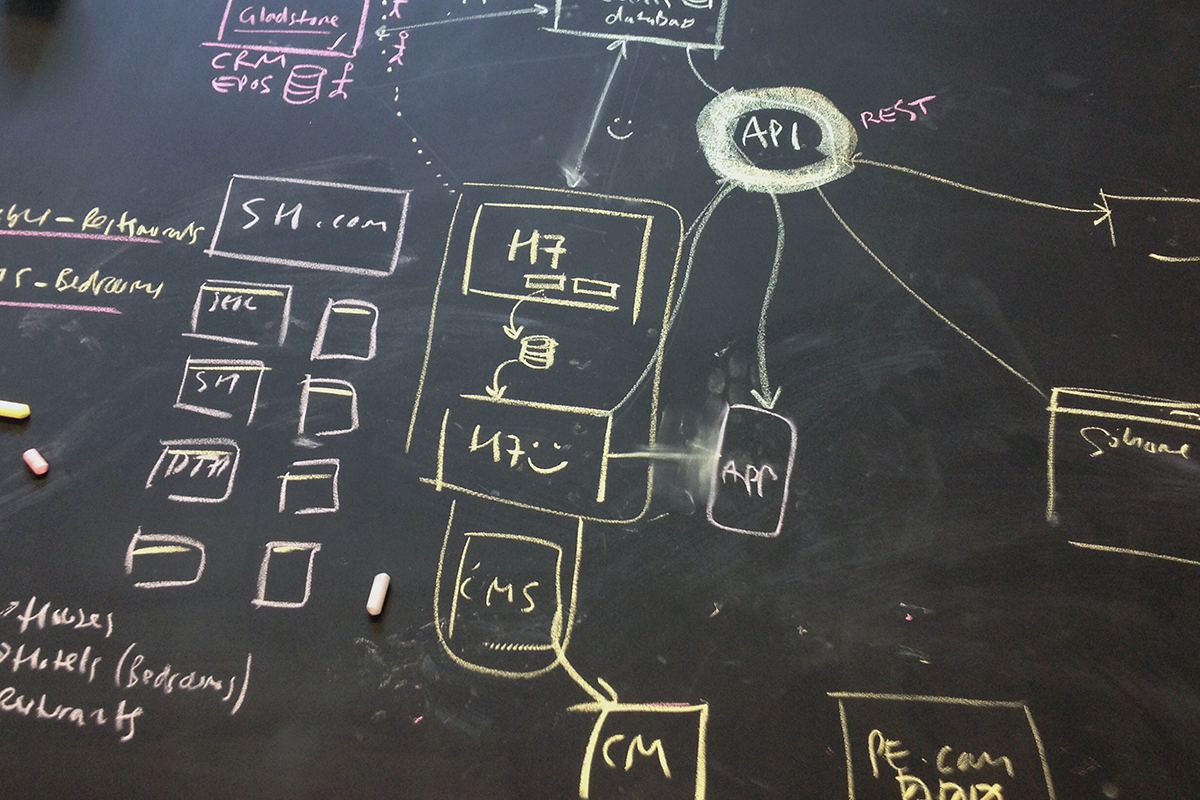 Soho House and With Associates
The relationship explained by Anna

When I joined With Associates as a producer in November 2013, I knew that Soho House were one of our biggest retained clients. On my first day in the studio my predecessor Lawrence and With co-founder Mathew drew out the Soho House digital ecosystem on a chalkboard for me. I took a picture of it to aid memory of such a complicated diagram, and started to get a sense of the scope of what I was about to start dealing with.

After six months of running the project day to day, I had a good understanding of quite how deep the relationship runs and the complexity of the business systems built behind the scenes, completely interwoven into how the entire company runs.

Trying to illustrate that to the outside world, though, seems like a tough task - but a necessary one. Our relationship with digital director Kris and his team is one of those that enables us to be as close as we can be to our ideal practice of working ‘with’. Showing what happens under the hood of that relationship was the best possible chance to fulfil one of our 2014 goals: to explain the complexity of what we do.

Like most difficult tasks, we decided it was best solved over lunch. Mathew and I invited Kris to Rochelle Canteen one sunny day in April, and the two of them began to talk.

Large chunks of lunch are taken up with attempts to work out how long we’ve worked together. After getting lost in the chronology, we finally nail it as four years. “Crazy,” says Mathew, “we could design and plan and build and turn out ten sites a month now for Soho House, if we needed to.”

Those four years have seen Soho House go from six Houses to twelve, and from one digital agency to five. Along with restaurants, spas, hotels and events, there are now over forty websites sitting under Kris’s jurisdiction. And after four years together, we’ve had a hand in almost all of them.

That aforementioned concept of working ‘with’, though, is framed around being so close to the client that we don’t just advise on their website - but on how their digital offering impacts on the rest of their business, too. The membership payment system we’ve just helped to build, for example, isn’t really a website, but runs all the way into the heart of the business - members can now renew their memberships online, rather than over the phone.

“It’s so ingrained now, the work that you do within the business. It’s not just designing websites, and it hasn’t been for quite some time. We could quite easily roll out and get a new website designed by whoever, but below the surface, everything that happens there, getting it connected to anything else that we have, that’s from the knowledge that’s implied throughout all our relationship, you know?”

Mathew joins in. “It’s about facilitating the business to do its own thing well in this new internet age. Without throwing everything away and starting again. We’ve done everything we’ve done all this time without any interruption. Also during quite enormous growth, it’s not like the business has been static in that time.”

“Yeah - I think the nature of so much that you guys do and what we do is that it doesn’t affect how the business runs at all. But without it it would stop”, says Kris.

“Our angle has always been, we shouldn’t be noticed”, agrees Mathew. “The proof of us doing our job well is that things just run, and it’s not got our name all over it.”

That proof is most visible in House Seven, the new incarnation of the site Kris was first hired to launch and champion. “My role coming in was to launch Virtual House, which had been thought up beforehand”, Kris explains. “The idea was that members could sign up for anything that they were interested in and receive emails about that, so if you were interested in fashion in New York, you’d only receive emails about fashion in New York.”

Virtual House soon turned into House Seven, as founder Nick Jones sparkled on some of the branding dust that has also touched Chicken Shop and Cowshed. It’s Soho House’s site for members, recreating online the way that Soho House interacts with its members offline. Members can pay for their membership, sign up for the weekly email, register to attend events, and pay and book for their hotel rooms or gym classes. Not to mention the growing area of editorial content and features about everything House members (who predominantly belong to the media and creative industries) might be interested in.

When we started to help with building House Seven in 2011 it was the beginning of building a mature digital ecosystem for Soho House. We helped to build an API to integrate with legacy systems and software, and under a glossily designed hood it integrates around nine different systems, presented as one.

It’s a far cry from Virtual House, and as digital has grown in importance for Soho House, the internal digital team has gone from Kris on his own - “There was a button on Virtual House that said “Ask Kris”, which used to generate emails direct to me. Anything. Anything at all” - to a team of six, working across editorial, marketing and design.

That network of five agencies, too, means the knowledge that used to sit in Kris’s head is now distilled across tens of individuals. “It’s documented, it’s passed on, maybe a digital person could unravel that now, and they could pass it onto someone else.”

For us at With, that has always felt like the safest way to build up Soho House’s growing digital ecosystem. “You build things with redundancy, with the ability to be removed”, explains Mathew.

“Sometimes people get a bit confused by the fact that we didn’t come in and try to make those five agencies all us. But we see the value in it being multiple people.”

“Exactly”, agrees Kris. “You bring an expert in and it doesn’t reduce the work, it increases the work and makes it its own area. Better and stronger.”

“That enables us to focus on the other bits and pieces and streamline things at your end and make things go faster”, says Mathew. “Make things better.”

We're a digital agency. We plan, design and build websites and apps. Read more about our clients, or just get in touch:

54B Downham Road
London N1 5AS
View in Google Maps

We set up 54B in 2013 as a shared workspace for designers, developers, illustrators, artists, architects, writers and more.

We're available for short daily pairing sessions. Because a problem shared is a problem solved.

Once a week we send out an issue of With Links. Ten links on a weekly theme, from the ten of us at With.

Get With Links in your inbox every Friday: